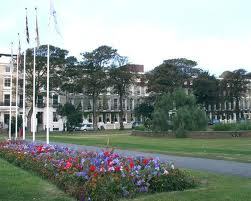 The Steyne, now the Chatsworth, Hotel was opened in 1807, with an assembly room that rapidly became the social centre of the resort and by 1811 it hosted an orchestra and an organ. In the Nineteenth century the chief venue for visiting theatrical companies was the Montague Hall, later St. James’s Hall, in Montague Street, a former chapel where concerts and lectures were also held. In 1883 the town and resort were said to lose incalculably by the lack of a proper hall and in the following year the New Assembly Rooms capable of holding 1,000 persons were opened in Bath Place, the gift of Sir Robert Loder, M. P. The building was used as a seasonal theatre, and for concerts, until 1897 when it was converted into a proper theatre, the Theatre Royal. It was enlarged in 1906 by C. A. Seebold, a naturalized Swiss, and by 1910 it was open all the year round, the Italian and Carl Rosa opera companies, among others, performing there. It was sold in 1922 and demolished in 1929. In 1909 Seebold built the Kursaal in Marine Parade where popular concerts, including J. P. Sousa’s band, were held. Seebold also had his own band and orchestra. Another musical promoter of the time was J. W. Mansfield, who ran chamber concerts from c. 1906 in the St. James’s Hall in which leading artists appeared, and children’s concerts in the Theatre Royal. Meanwhile open air concerts were held after 1889 in the grounds of Warwick House. 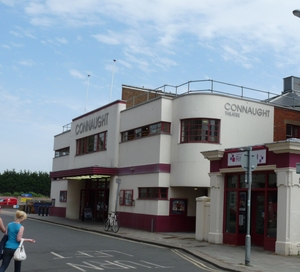 In 1921 part of the Kursaal was converted into Worthing’s first permanent cinema, the Dome. In 1931 a repertory company was formed in the Connaught Theatre, formerly the Connaught Hall, on the corner of Chapel Road and Union Place. In 1935 it was transferred to a converted cinema in Union Place. In 1935 a new Assembly Hall was opened at the rear of the new town hall, chiefly at the expense of former mayor, J.G. Denton. By the early 20th century musical groups included choral, orchestral, madrigal, operatic, and musical comedy societies, and a music club. In 1938 there was an amateur symphony orchestra, an operatic choir, and a boys’ choir. The amateur Worthing Citizens Orchestra was formed in 1949 with help from the corporation, and was renamed the Worthing Philharmonic Orchestra in 1976. The Worthing music festival was started by the corporation in 1949 and continues to this day.

The exact date of the formation on an orchestra in Worthing is difficult to pin down. Entertainment on the pier wasn’t considered until 1874 when a 9-piece orchestra was engaged to play for three hours a day ‘weather permitting’. In 1881, a German band from the Rhine was contracted to play daily and conditions were improved with the construction of two shelters. The Pier Pavilion became the centre of Worthing’s musical life and in 1920 Worthing Corporation purchased the pier. Visitors to the Pier were charged 2d which included admission to hear an Orchestra play in the South Pavilion. Between Easter and Autumn the Orchestra performed at 11am and 6pm every Monday to Saturday and on Sundays at 3 and 7pm. Monthly tickets cost 5/- and 3/- for a two-week ticket. In 1926 the Council demolished the kiosks and replaced them with a new Pavilion to seat 1,000 people. By 1927 the Pavilion had a resident quintet and was home to the Worthing Municipal Orchestra, one of the earliest, full time, all-year-round orchestras at a seaside resort. By 1937 there were bi-monthly orchestral concerts. 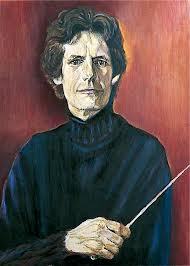 In May 1940 a series of farewell concerts heralded the standing down of the orchestra during the dark days of WWII. In the immediate post-war period it was expected to play seven days a week (sometimes three sessions a day) but by 1967 a regular day-off had been established. In 1978 the Municipal Orchestra was disbanded to be swiftly replaced by the Worthing Symphony Orchestra. Under the strong leadership of Jan Cervenka and then John Gibbons, Worthing Symphony Orchestra has become a leading symphony orchestra in the region. At various times Borough cut-backs have threatened both the orchestra and the Assembly Hall but spirited campaigns have ensured that the high cultural value of WSO continues to entertain an enthusiastic core audience as well as draw new audiences and visitors to Worthing.

In 2013 the orchestra gave the world premiere of a short Intermezzo ‘Chimes at Sunset’ by a member of the 1930s orchestra – James Charles White. 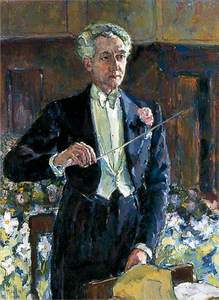 Herbert Lodge (1935-1954) was conductor of the Worthing Municipal Orchestra from 1935 until his retirement in 1954. Previously he conducted Margate Municipal orchestra between 1928 and 1939. He composed or arranged various orchestral items including the cleverly titled Tunelandia. He formed a large orchestra and municipal choir, both so highly regarded by the BBC that they broadcast their performances nationally on numerous occasions.

James Kershaw (1954-1967)was born in Oldham, Lancashire and by the age of eighteen he was conducting a cinema orchesta in Manchester. He studied the violin at the Royal Manchester College of Music under Arthur Cotterall (the first leader of the BBC Symphony Orchestra) and then continued his career playing in seasonal orchestras at Bath, Blaokpool and Buxton under the baton of Edward Dunn. In 1935 he swapped violin for baton and directed theatre and cinema orchestras in Rochdale, Blackburn, Manchester and Edinburgh and a seasonal orchestra in Blackpool. He served in the
RAF for five years during the Second World War, spending three and half years abroad, and then returned to direct orchestras at Colwyn Bay (3 seasons) and Bridlington (5 seasons) before his appointment as Music Director for Worthing Borough Council in 1954.
At Worthing he continued Herbert Lodge’s duties of directing the Municipal Orchestra in light music concerts and also training and conducting the amateur Municipal Choir and Citizens’ Orchestra.
He conducted seasons of symphonic music with an augmented Municipal Orchestra but with limited resources, often paying for extra players out of his own pocket or arranging the orchestration to allow performances of works that would not otherwise be possible within his budget.
Known affectionately as ‘Jimmy’ to all he was of distinguished appearance, always immaculately dressed and well-coiffured. As a typical forthright Lancastrian he was always kind and supportive to his musicians in both professional and personal matters. Tragically he died in post and a memorial concert conducted by David Wilde was held in October 1968 at the Assembly Hall with musicians from all parts of the country taking part.
Biography of James Kershaw by Robin Knibb.

Jan Cervenka (1967-1996) Jan was born in London of Czech parents and trained at the Royal College of Music, the University of London and the Musik-Hochschule in Berlin. Jan was full time Music Director to Worthing Borough Council – the only such position in the country. He was responsible for the administration and conducting of all concerts sponsored by the Council. He was a conductor for the Royal Ballet and gave many concerts with BBC orchestras. Work abroad included concerts in Romania, Venezuela, Bulgaria and Holland. He was closely associated with the Southern Arts Association since its formation and conducted a number of times at the Royal Festival Hall and the Royal Albert Hall. 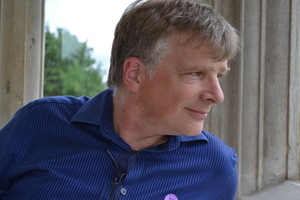 John Gibbons (1997 – present day) Following the retirement of Jan Cervenka, the 1996-7 season was used to invite a number of conductors to perform with the orchestra. John Gibbons was the unanimous choice of all voting parties (audience, orchestra, selection panel) and took up his position at the start of the 1997-8 season. Under his leadership the orchestra has continued to thrive with increasing audiences and a growing National reputation for the orchestra’s quality of sound and performance. John is a renowned communicator with audiences and he makes particular efforts to welcome newcomers to orchestral concerts with light-hearted but authoritative introductions to the music. He is committed to engaging with young musicians across the county and instigated a very successful series of Youth Proms. He has made a number of important recordings including the string concertos by Arthur Benjamin on the Dutton Epoch label with the Royal Scottish National Orchestra and Bruckner’s Ninth Symphony (including the Finale completed by Nors Josephson) with the Aarhus Symphony Orchestra on the Danacord label.

Alex Frankel – Conductor of the Municipal Orchestra in the 1940s. Pictured at bottom of this page playing in the Royal Army Medical Corps in Cairo during WWII

Harry Lipman – Leader of the Worthing Municpal Orchestra in the 1940s

John Ludlow – Leader of Worthing Symphony Orchestra in the 1980s 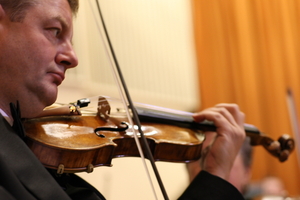 Philip Challis – International Concert Pianist and resident of Durrington-on-Sea. Regular broadcaster with the BBC. Taught piano at Lancing College where one of his pupils was conductor John Gibbons. Philip was a regular soloist with WSO and premiered the Geoffrey Cummings-Knight Piano Concerto with WSO.

The war-time dance band of the Royal Army Medical Corps, under the direction of Bandmaster Harry Johnson, entertaining repatriated prisoners of war at a garden party given in the grounds of the British Embassy in Cairo. The vocalist is Lee Sheridan, now better known as Dick James, managing director of Northern Songs, publishers of the Beatles' music. The musicians are (front row, left to right): George Tofield; Oscar Grasso, now featured violinist with Victor Silvester's Orchestra but a leading saxophone player before the war); Les Gilbert, lead alto player with Ted Heath for many years; Ding Hughes; Glanmore Spiller, then violinist with the BBC Welsh Orchestra, Alex Frankel, one-time conductor of Worthing Municipal Orchestra; and (hidden) Doug Townsend, cellist. On the extreme left, the clarinetist is " Taffy" Cullen, and the viola player is Gordon Humfress.